I won’t even bother with spoilers here. If you’re reading this, then you already know you’re in for some spoilers.

So, to answer the question, yes and no. Yes for the TV series. No for the books. Let’s start with the series.

After Olly and Alliser Thorne lure Jon out, a large group of brothers crowd around him and stab him to death. On screen, Jon is stabbed 6 times and then, without blinking, moving his lips, or breathing, he then lies in the snow for 32 seconds as a pool of blood forms around him.

Entertainment Weekly (EW) asked Games of Thrones director Dan Weiss if Jon was truly dead. He responded saying, “Dead is dead…We would hope that after seeing the scene and the way it’s shot that the answer to that will be unambiguous in the minds of the people watching it. It should be pretty clear what happens by the time you’re done seeing that scene. It’s not an, ‘Oh what just happened scene?’”

Weiss was very firm on the idea of ambiguity. He pointed out that in TV and film you cannot be as ambiguous as in literature. Consider Eddard Stark’s execution. 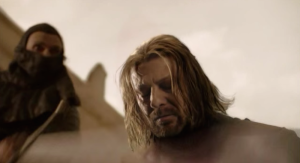 The sword clearly passes through his head. There is no argument here. He’s not going to walk it off. He’s not going to sew his head back on. Ned is dead, and dead is dead. Likewise, Jon is unambiguously dead. There were no smoke and mirrors. He got stabbed, he bled, and now he’s dead.

In an interview with Jon Snow actor Kit Harington, EW asked if he was really dead. Apparently, directors Weiss and Benioff sat Harington down and told him he was dead. But, because I know you want to hear it from Harington’s own lips, he told EW, “I’m dead. I’m not coming back next season.” Seems pretty clear to me.

Also, I should mention that Harington cut his pretty Jon Snow locks. Filming starts in late July. He could regrow his hair or use extensions or a wig, but again, it seems pretty definite.

Not to mention, Weiss and Benioff really love to kill. They kill even more than George R.R. Martin does. Talisa Stark (Jeyne Westerling in the books) wasn’t killed in the Red Wedding because she didn’t go. Jojen Reed? Still kicking it with Bran. Pyp and Grenn survived the battle at Castle Black. Daenerys’ servants Rakharo and Irri still live. Shireen Baratheon, oh the poor girl. Wait! She’s fine…for now anyways. Xaro Xhoan Daxos was never killed. He even shows up in Meereen during A Dance with Dragons (ADWD) to talk to Daenerys. Pyat Pree is fine, but the other undying were burned to death. Barristan Selmy is fine. In fact, George R.R. Martin spends a great deal showing his troubles handling Meereen in Daenerys’ absence. Hizdahr Zo Loraq is also alive. I’ll be honest. I thought he was the leader of the Sons of the Harpy. Weiss and Benioff didn’t seem to think so. Mance Rayder is fine. Melisandre disguised Mance as Rattleshirt and burned Rattleshirt in his place. Finally, Catelyn Stark…sorta. She was brought back to life and lives on as the undead Lady Stoneheart. I’m definitely missing some. Feel free to add some in the comments.

If all those people are dead, then I’m sure Jon is too.

First off, Martin is a little heavy on the hints. In a 2011 interview with EW, he responded to the question “So why did you kill Jon Snow?” with “Oh, you think he’s dead, do you?” Insert wink and cheeky George R.R. Martin laugh.

But why wouldn’t he be dead? He got stabbed. A lot. There are two main theories:

Warging or skinchanging is the ability to transfer your soul/consciousness into the body of an animal. We already know that John may be a warg. Well, George R.R. Martin says outright that all the Stark children are wargs. But let’s look into the book.

There are several times that Jon experiences things as if he were Ghost. He smells various scents in the night after brushing up against Ghost. He feels like he and Ghost are one. He even dreams he is Ghost, and in ADWD, such wolf dreams are said to be getting stronger. Ooh, maybe his warging is developing.

In the prologue of ADWD, Varamyr says, “He had known what Snow was the moment he saw that great white direwolf (Ghost) stalking silent at his side. One skinchanger can always sense another.” He goes on to say that “The gift was strong in Snow, but the youth was untaught, still fighting his nature when he should have gloried in it.”

Melisandre notices Jon’s true nature. In between warning Jon about “daggers in the night,” she tells him to keep his wolf close. Later, she says to him that there is “power in you, and in this beast. You resist it, and that is your mistake. Embrace it. Use it.” Not only this, but Melisandre also has a vision of Jon in her flames, a vision in which “Now he was a man, now a wolf, now a man again.” Perhaps Jon will embrace his power, and perhaps he will find his body again.

Moreover, Jon’s last words are “Ghost.” His last words. As he’s dying, he says “Ghost.” Come on. That’s got to be important!

We’ve seen resurrection before in Game of Thrones, specifically with the involvement of Red Priests. Thoros of Myr resurrects Beric Dondarrion six times. Then Beric gives up his life to resurrect Catelyn Stark, thus creating Lady Stoneheart. Melisandre is a Red Priestess. Why couldn’t she bring Jon back? True, we have never seen Melisandre raise the dead, but George R.R. Martin tells us in ADWD, “She was stronger at the Wall, stronger even than in Asshai. Her every word and gesture was more potent, and she could do things she had never done before.”

Melisandre seems to take great interest in Jon too. She warns him about “daggers in the dark” numerous times and tells Jon, “soon enough you may have grave need of me” and “I am your only hope” (ADWD).

The problem here is that “only death can pay for life.” Melisandre says this in A Sword of Storms (ASOS), but we also see this in action during the revival of Khal Drago and the hatching of Daenerys’ dragons. Also, remember that in order to bring back Catelyn, Beric Dondarrion offers his own life. Okay, yeah, Beric came back to life six times without anyone else dying as far as we know, but he came back less like himself each time. He bore all the wounds from his deaths and he lost much of his memory from before the War of Five Kings.

So, who’s going to die for Jon to come back? Probably Shireen. Melisandre is always blabbing about the power in king’s blood. Besides, the show already killed her off. Maybe Weiss and Benioff were just paving the way.

Whatever the case, take a step back. Look at the big picture. The series is called A Song of Ice and Fire. If you killed off Jon, you would lose out on the ice part. Maybe you could follow Melisandre a little longer, but she is not going to lead the battle against the White Walkers. That is Azor Ahai’s job. More or less, she is just a helper. Azor Ahai, just FYI, is a hero that fought back the White Walkers years and years ago, and is supposed to return to do it again. This time the White Walkers won’t be coming back.

And there is great evidence that Jon may be this Azor Ahai. We know certainly that it is not Stannis. Stannis may be the Mannis but he got his ass handed to him by the Boltons, at least on the show. In the books, Jon receives a pink letter from Ramsay Bolton saying that Stannis was killed. The letter could be a lie. Heck, Ramsay may not even have sent the letter. But ignore that because even if Stannis lives, all the evidence is stacked against him being Azor Ahai.

Melisandre says “I pray for a glimpse of Azor Ahai, and R’hllor shows me only Snow” (ADWD). Unless R’hllor likes to joke, it seems that R’hllor is saying Jon is Azor Ahai.

But what are the supposed signs of Azor Ahai? Melisandre tells us in ASOS, “When the red star bleeds and the darkness gathers, Azor Ahai shall be born again amidst salt and smoke.” Aemon Targaryen, Benerro the High Red Priestess of Volantis, and Marwyn the Mage all say similar things. There is also supposed to be a flaming sword called Lightbringer. According to legend, Lightbringer was created through sacrifice. Azor Ahai stabbed his wife Nissa Nissa through the chest and voila! Fancy, magic sword.

Rhaegar Targaryen believed the bleeding red star was a comet like the one seen in A Game of Thrones and A Clash of Kings. But not everything is so literal. George R.R. Martin says, “Prophecies are, you know, a double edge sword. You have to handle them very carefully; I mean, they can add depth and interest to a book, but you don’t want to be too literal or too easy.” When Jon is killed, Ser Patrek’s heraldry, blue stars, is splattered with blood and is floating above. That could be the bleeding red star.

The darkness is definitely gathering. No one can argue with that.

When Jon is stabbed, his “wound was smoking”. There’s your smoke. Also, Bowen Marsh is crying. There are your tears. Maybe that one is a little shaky, but roll with it.

As for Lightbringer, Samwell Tarly mentions in A Feast For Crows (AFFC) that Azor Ahai fought the White Walkers “with a blade of dragonsteel.” He thinks that might mean Valyrian steel. Jon has a Valyrian steel sword called Longclaw, though Longclaw isn’t flaming. Some think that after being revived, Jon will kill Melisandre for sacrificing Shireen. Perhaps by plunging Longclaw into Melisandre’s chest, Jon will get Lightbringer. Oh and I should also mention that Jon has a dream in ADWD where he fights the White Walkers with a burning red sword. Sounds like Lightbringer to me.

Dragons are also involved. Aemon Targaryen thinks Daenerys is Azor Ahai and says, “The dragons prove it” (AFFC). Melisandre says, “Azor Ahai shall be born again amidst salt and smoke to wake dragons out of stone” (ADWD).

Additionally, Rhaegar and Aemon both say that “the dragon must have three heads.” What does that mean? Either Azor Ahai is three people or Azor Ahai has two buddies to help him out.

Well, if we are to believe the theory that R+L=J, after Rhaegar ran off with Lyanna Stark (Eddard Stark’s sister), he knocked her up and she popped out Jon Snow. That would make Jon the grandson of Aerys and Rhaella. Also, if R+L=J, that would fit in nicely with Rhaegar’s assertion that “his (Azor Ahai’s) is the song of ice and fire.” Stark for ice and Targaryen for fire.

What about the three heads, though? Some would argue that the three heads must all be Targaryen. Thus, it could be Jon, Daenerys, and Tyrion. What’s that? Tyrion is a Lannister? Well, some think he is actually the son of Joanna Lannister (Tywin’s wife) and Aerys “The Mad King” Targaryen who did suggest on Tywin’s wedding night that he would like to bang Joanna. Maybe he did.

Even if Tyrion isn’t Targaryen, can you picture it? The three favorite characters of the series fighting off in a giant battle against the White Walkers. And hey, there are three dragons. Maybe each person gets one.